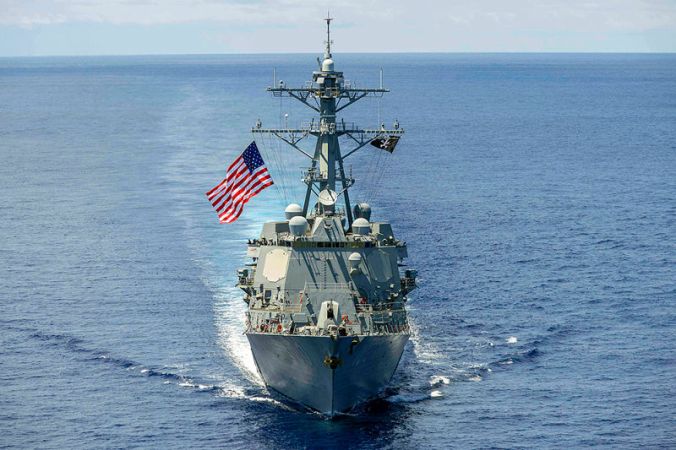 Well, perhaps not hardball yet, but tensions are rising. The sail-past of disputed islands by the destroyer USS.Lassen last night has ruffled feathers in Beijing. Lassen actually moved inside of the 12 mile territorial limit claimed by China around Subi Reef in the Spratly Islands. The United States does not recognize the formation of China’s man-made islands in the South China Sea as sovereign territory. Beijing, predictably, did not respond well to the action, which it viewed as the US Navy trailing its coat along Chinese territory. The US ambassador to Beijing was summoned by the Chinese Vice Foreign Minister and told that the Lassen’s actions were ‘extremely irresponsible.’ This was the first time since 2012 that US naval units traveled within the 12 mile limit. By all accounts, the practice will become a regular occurrence in the future. A Chinese guided missile destroyer and patrol ship shadowed Lassen during its transit, keeping a safe distance and limiting its involvement to issuing warnings.

The South China Sea is an area where China has been concentrating a large amount of military activity in recent months, including the expansion of reefs to accommodate runways and support facilities for aircraft.

Russia’s military has suffered its first death…that we know of….since becoming involved in the Syrian conflict. The Ministry of Defense has announced that a soldier committed suicide at the Russian base in Latakia, Syria. The announcement was made after sources revealed the name of the soldier: Vadim Kostenko and indicated that the man’s relatives and colleagues began mourning his death last weekend. The family is disputing the reported cause of death. Last week, the Wall Street Journal reported the death of a Russian serviceman due to ‘careless weapons handling.’

Russia has a history of being cryptic when it comes to discussing combat casualties. During the early stages of the conflict with Ukraine, Moscow had much difficulty holding back news about Russian combat deaths. In a conflict that Russia officially claimed its soldiers were not fighting, the number of fresh graves rose at a number of military cemeteries across Russia.

The US Air Force has awarded Northrop Grumman with the contract for the Long Range Strike Bomber. The LRS-B will be a heavy bomber capable of launching from the United States, reaching targets anywhere in the world and in the process, penetrating heavily defended airspace. The mission profile of this aircraft is no different from the profiles of the bombers currently in the US inventory. The difference will come in the defensive and offensive capabilities that the LRS-B will have to offer.

The Air Force and Navy are moving ahead with plans to modernize America’s strategic forces despite consistently shrinking budgets. Programs for new SSBNs and ICBMs are in development. Contracts will not be rewarded for some time, however, it is refreshing to see that the US is moving in the right direction. Today, more than ever since the end of the Cold War, the US nuclear deterrent needs to be seen as a credible force.