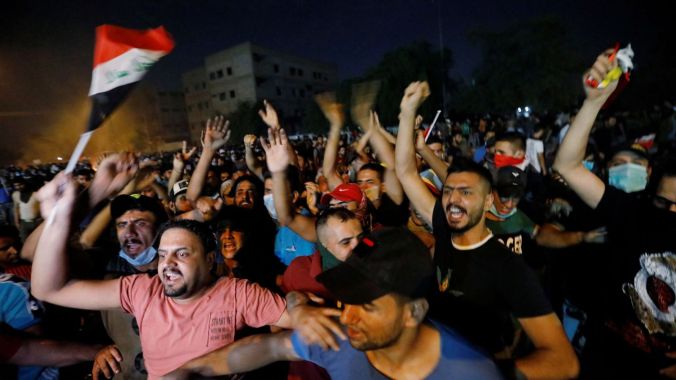 After six days of bloody street protests, Iraq continues its descent into chaos and violence. Government officials today have confirmed that 104 citizens have been killed, and over 6,000 wounded. The wave of protests across Iraq have challenged the already vulnerable government of Prime Minister Adel Abdul Mahdi. The government has cracked down on the protests, ordering police, security forces, and soldiers to use lethal force on the protesters. The internet remains suspended in in many urban, and heavily populated areas of the country. The government has taken advantage of the digital shut down it imposed to  portray scenes of normalcy through state media. Opposition-supported media outlets broadcast scenes of angry crowds being fired upon by government forces, negating the government’s attempts to control the flow of information. Police have raided a number of TV news stations that have broadcast video of the protests.

Mahdi understands the precarious position his government is in. On Saturday, he announced a 17-point recovery plan, wagering it could calm his people. However, today the crowds appeared again and security forces continue to use tear gas and live ammunition against them. Living conditions, and a high unemployment rate are two primary factors motivating the demonstrators to remain in the streets in defiance of their government. International attention on the situation is growing, despite the government’s best efforts to control the flow of information. There are rumors circulating around Baghdad that Iranian militias are supporting security forces. Claims that some of the government troops have been seen and heard speaking Farsi have been reported by some media outlets. There has been no evidence offered to support the claims though. That does not necessarily mean they’re false, but for the moment Iran’s alleged involvement in the crackdown is unconfirmed.