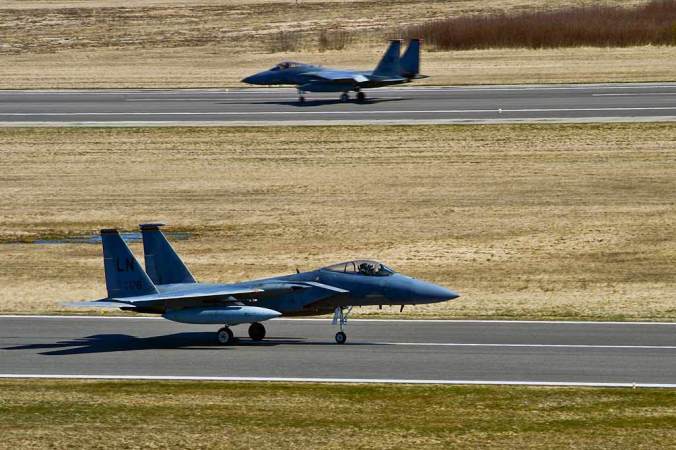 With Zapad 17, the major Russian military exercise that has the Baltic states. and Eastern Europe on edge, set to begin in two weeks, US airpower is making an appearance in the region. NATO’s Baltic Air Police mission has just gone through a rotation of forces. Spanish F-18s and Polish F-16s, which have guarded the airspace of Lithuania, Estonia, and Latvia over the summer of ’17 have been replaced by a contingent of 4 Belgian F-16s and 4 USAF F-15C Eagles. The Belgian -16s will be based at Amari Air Base in Estonia while the US fighters bed down at Šiauliai Air Base in Lithuania. The US will assume overall mission command for this BAP rotation, which will run from 30 August until late December, 2017 or early January, 2018. The US F-15s belong to the 493rd Fighter Squadron based at RAF Lakenheath. The squadron, like its parent unit the 48th Fighter Wing, is no stranger to deployments. Its aircraft have taken part in air policing rotations in the Baltic and Iceland in recent years.

With Zapad 17 coming closer, Russian air activity over the Baltic Sea has been increasing. The number of interceptions carried out by NATO over the summer was larger than it had been at the same time last year. Since the Russian annexation of Crimea, and the start of fighting in Ukraine, the Russian air force has kept NATO Baltic Air Police pilots on their toes. As tension goes, so does the number of interceptions. If the numbers lately are any indication, relations between NATO and Russia are anything but harmonious at the moment.

August is here and Zapad 17 is on the horizon. As it approaches, concern and speculation are beginning to grow at a faster pace within media, military, and geopolitical circles. Many non-military observers view Zapad as an intimidation weapon being wielded by Russian President Vladimir Putin while military analysts see it as essential training and cohesion to prepare Russian forces for potential future conflicts. Both groups are correct.

Some details that have been widely known about Zapad 17 since earlier in the year continue to hold true. The number of troops involved will be over 100,000 with the overwhelming majority of them being Russian, and most of the training will take place in Belarus. NATO has been invited to witness the exercise and will be sending roughly eighty observers to Belarus in September. Despite the invitation, many NATO countries are openly apprehensive about Zapad 17, especially the Baltic States and Poland.

More particulars about the exercise are becoming known through official Russian government outlets, and less frequently from NATO and US sources. Main elements of the recently reconstituted 1st Guards Tank Army will form the centerpiece of the exercise. This army was reformed in late 2014 after a sixteen-year period in decommission. Zapad 17 will be the first opportunity for the main combat elements of 1st Guards to work cohesively. Incorporating it into the exercise is also meant to serve as a message to the Baltics and Poland. 1st Guards has an extensive pedigree from serving on the Eastern Front in World War II, through to post-war occupation duty in Berlin, and later taking part in the 1968 invasion of Czechoslovakia to break the Prague Spring.

Preparations for the exercise are underway in earnest. Russia has requisitioned enough rail cars to transport 4,000 tanks and other pieces of heavy equipment to and from Belarus. By mid-August advance parties from many of the units scheduled to take part in Zapad will begin arriving in Belarus ahead of the main formations. The primary surge of Russian combat units into Belarus is expected to take place in late August and Early September. The exercise is scheduled to begin on 14 September, 2016 and run until the 20th. 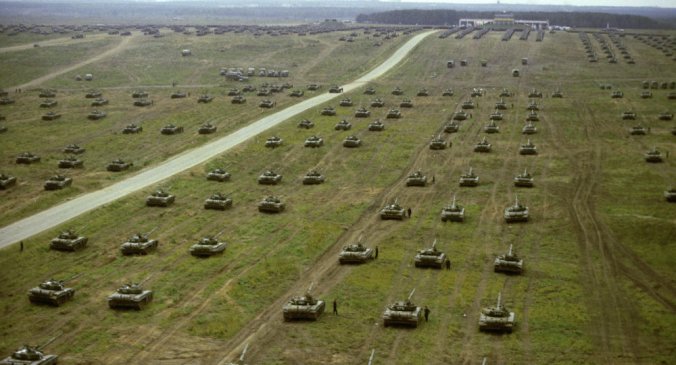 Amid the swirling tensions and subdued game of brinkmanship being played between NATO and Russia in Eastern Europe, the Baltic Republics are urging the United States and NATO to put more security measures into effect ahead of Zapad 17, a major Russian military exercise scheduled to take place in the region this coming September. The exercise will place a large number of Russian combat units in close proximity to the borders of Lithuania, Latvia, and Estonia. Although the exercise is seven months away the Baltic defense ministers and general officers are growing increasingly leery over the prospect of Zapad 17 worsening an already tense, and unpredictable situation. Lithuanian President Dalia Grybauskaite has called the exercise a “demonstrative preparation for war with the West,” highlighting a growing level of concern in the region over the exercise.

Exercises like the Zapad series are large scale strategic exercises carried out periodically to test the ability of the Russian military to operate jointly under realistic conditions in a simulated wartime environment. They generally take place every two years or so and serve as a litmus test to gauge the proficiency of Russia’s armed services. Zapad and other strategic exercises like it are not a recent trend for NATO to contend with. They’ve been held since the days of the Cold War and Soviet Union and even back in the 70s and 80s caused headaches and anxiety for NATO. There was always a concern in those days about Soviet strategic exercise taking place in East Germany and Eastern Europe. Namely, the possibility that one could potentially serve as cover for the build-up of forces needed to launch an invasion of West Germany.

The concern was plausible during the Cold War and still is today. The conduct of forces involved in preparing for a Zapad-like exercise mirrors that of forces preparing to launch offensive operations. A tank regiment moves towards its simulated objectives placed in relative close proximity to the Belarussian-Lithuanian border ostensibly as part of an exercise. Only instead of turning north off of the M7 highway, the formation continues northeast towards the nearby Lithuanian border and Vilnus. Highly unlikely, but still within the realm of possibility.

To the average European or American citizen, the Baltics are not quite a powder keg and thus Zapad-17 is hardly an errant spark. The average Lithuanian or Estonian politician may see things differently, however, and at the moment it is their opinions and views which are driving the situation for the moment.