On Friday the Chief of Naval Operations Admiral John Richardson, announced the reactivation of the US 2nd Fleet, which was the US Navy fleet responsible for operations in the North Atlantic until it was deactivated in 2011. Its AOR, and operations were taken over by the 6th Fleet, which covered both the Mediterranean and Atlantic during the time. The move has been expected for some time now. As relations between the United States and Russia began their downward trend after the 2014 annexation of Crimea, Russian naval activity in the North Atlantic increased. In the later years of the Obama tenure, the US Navy began to take a hard look at the possibility of standing up  2nd Fleet once again. The prospect did not begin to gain momentum until 2017 when the Trump administration and then-new Secretary of Defense James Mattis began to take a hard look at the US military and the changing geopolitical realities around the world

Richardson alluded to that in his remarks. “Our National Defense Strategy makes clear that we’re back in an era of great power competition as the security environment continues to grow more challenging and complex.” This move is a clear indication that the Pentagon has placed a high priority in countering Russia’s heightened military activity. A large part of this strategy includes a US pivot back to Europe and the North Atlantic.

Increased Russian naval activity in the Atlantic over the last 2-3 years has been a concern for NATO as well as the US Navy. In a nod to the Cold War days and SACLANT, NATO’s new Atlantic Command will join the 2nd Fleet as being headquartered in Norfolk. 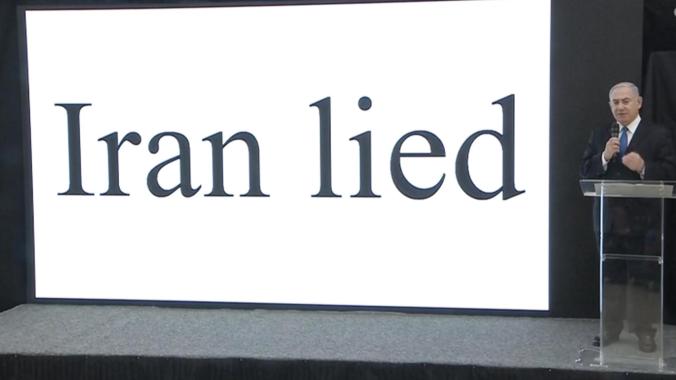 With the deadline for a decision on the future of the Iran nuclear deal approaching, supporters and detractors of the agreement have been showcasing positions over the past week in an effort to influence President Trump’s final decision on whether or not the deal will be scrapped. It is no secret that Trump has long viewed the 2015 Joint Comprehensive Plan of Action (JCPOA) as deeply flawed and overly advantageous to Tehran.

Last week the subject broached during French President Emmanuel Macron’s state visit to Washington. Macron, an ardent supporter of the deal, as well as Europe’s role in crafting it, has been pushing hard to rescue the nuclear deal. Macron, along with the leaders of the United Kingdom, Germany, are convinced that the agreement is the best instrument to stop Iran from acquiring nuclear weapons. Yesterday, Macron spoke with his Iranian counterpart President Hassan Rouhan and urged him to enter negotiations on the deal, but Rouhan declared it to be non-negotiable.

Israel, a major opponent to the deal, has been pressuring the United States to scrap the deal entirely. Yesterday’s presentation by Israeli Prime Minister Benjamin Netanyahu was a tad light on facts though it did serve to highlight Israel’s position with regards to JCPOA, as well as its fervent belief that Iran is still conducting nuclear research in violation of the deal. Netanyahu, and other members of the Israeli government have been conducting behind the scenes discussion with their US counterparts. Although the final decision on the fate of the nuclear deal will be made by President Trump, Israel is working hard to influence that decision to its favor, especially as tensions between Tel Aviv and Tehran have spiked in recent months.

The nuclear deal is only one part of the growing conflict between Iran and Syria. Iran’s increasing involvement in Syria is another. Tehran’s actions in Syria have brought on a heightened Israeli military response over the past two months. The latest example of this was a Sunday airstrike against an Iranian target near the city of Hama in Syria. Concern is growing in Washington about the growing conflict between Iran and Israel.

Trump’s final decision on the future of JCPOA, no matter what it may be, will undoubtedly  have a far-reaching effect across the globe.

Kim Jong Un and Moon Jae-in have concluded their one-day summit in the South Korean section of the Joint Security Area The first meeting between leaders of the two Koreas in over a decade was heavy on symbolism and drama. The two leaders pledged to bring the Korean War to a formal end, as well as make the entire Korean peninsula free of nuclear weapons. The global media simply could not get enough, declaring the meeting to be a success far beyond the hopes of both sides, and fawning over the images of Kim Jong Un crossing the border into South Korea.

What the media fails to mention is the fact that the two Koreas have been down this road before. At the previously held inter-Korean summit meetings the leaders of both nations made broad promises to cooperate on a number of issues, and pave the way for closer relations in the future. As time went on, the opposite happened and the Koreas returned to the tense, hostile relationship that both sides had hoped was permanently in the past. With this in mind, many observers are understandably skeptical about the pledges made by Un and Moon.

The 2018 summit is neither an end or a beginning. It is the latest move in a decades-long chess match. The overall hope is that this gathering has laid the groundwork for a more crucial meeting between US President Donald Trump and Kim Jong Un in the near future. Achieving this was a goal of both Korean leaders, but for entirely different reasons. Moon was intent on being seen as the man greatly responsible for thawing the US-North Korean standoff and bringing both sides to the negotiating table. He also wants to be able to take a large portion of the credit for any US-North Korean agreements regarding denuclearization. Un wants to negotiate with the United States, however, his reasons and motivation are suspect. Meeting with Trump as an equal would be seen as a major victory in Un’s eyes and establish North Korea as a world power. If there’s no concrete chances of him relinquishing North Korea’s nuclear weapons though, it’s highly unlikely the United States will agree to a meeting. And right now, there’s no proof the North Koreans intend to remain committed to denuclearizing their half of the peninsula, regardless of Un’s promises at the summit meeting yesterday. 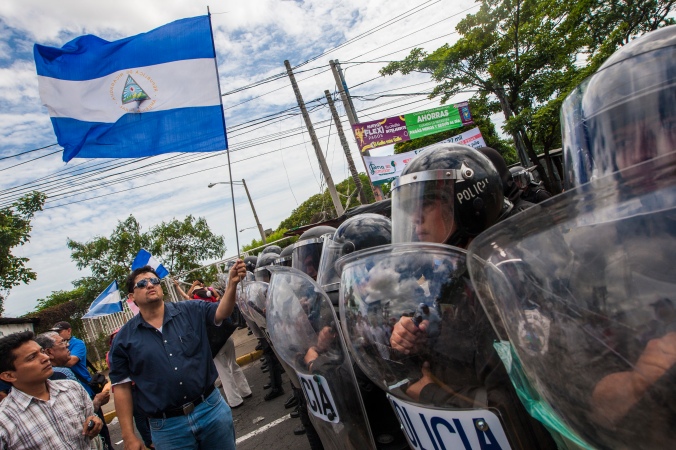 Protests and demonstrations in Nicaragua over the government’s intention to reform the nation’s pension plan became increasingly violent over the weekend. According to sources, the number of dead stands at twenty-six. The student-led protests in Managua last Wednesday expanded beyond the capital city to other parts of the nation. The protests themselves have evolved into a popular uprising and challenge to the authority of the government. Nicaraguan President Daniel Ortega announced on Sunday he will not go forward with the pension reform, obviously hoping to stabilize the situation. His action could have the opposite effect, however, with many protesters appearing determined to redouble their efforts, vowing to continue the demonstrations until Ortega leaves office.

The unrest in Nicaragua is drawing an increasing amount of international attention. The US State Department is removing a number of its embassy staff and families from Nicaragua in light of the violent protests. Pope Francis has also chimed in, calling for an end to the violence. The death of a Nicaraguan journalist while he was broadcasting on Facebook live has helped make more people aware of what’s taking place.

The longer the protests continue, more pressure will be applied to Ortega. The Nicaraguan leader is an avowed leftist cut from the same cloth as Fidel Castro and to a lesser degree Hugo Chavez. He was the head of government in the 1980s, transforming Nicaragua into a socialist state closely allied to Cuba and the Soviet Union. Ortega lost a re-election bid shortly after the end of the Cold War, only to be elected president again in 2007. Since then, he has moved the country back to the left, and in the process undertook a number of moves that strengthened his hold on power. Ortega’s influence is evident in every branch and department of the government. His influence helped the National Assembly do away with presidential term limits in 2014, and bring about constitutional reforms allowing Ortega to personally appoint military and police commanders.

Latin America deserves more scrutiny with Ortega being challenged, a new president taking power in Cuba, and the ongoing crisis in Venezuela. Nicaragua and Venezuela especially have many similarities at the moment. If Ortega continues to use force to quell the demonstrators and remains in power, Washington will begin paying more attention to events south of the border.

A formal end to the Korean War could be days away from becoming a reality. There are growing indications that the two Koreas are planning to announce the official end to the conflict. The Korean War ended with a ceasefire. No peace treaty or other statutory permanent agreement followed, meaning the war has been technically raging for  68 years although major combat between UN and North Korean/Chinese forces ended in 1953. A number of skirmishes have taken place between Combined Forces (US & South Korea) and North Korean troops. A number of them occasionally threatened to escalate into a major conflict, such as the North Korean seizure of the USS Pueblo, and the 1976 murders of two US officers at Panmunjon.

Ahead of next week’s summit between North Korean leader Kim Jong Un and South Korean President Moon Jae-In, officials from both nations appear to be working out the details for announcing the official end to the war shortly before the summit begins. The move would benefit both leaders tremendously. For Moon, bringing about an end to the Korean War would enable him to walk away from the summit with a victory that would play very well with South Koreans. For his North Korean counterpart, it would hopefully send a signal to the world that Kim Jong Un’s softening stance is genuine.

An agreement ending the Korean War would also raise expectations for the planned meeting between US President Donald Trump and Kim Jong Un that’s expected to take place within the next month. Preparations for the meeting have been progressing for some time. Over Easter weekend, current CIA Director and Secretary of State nominee Mike Pompeo allegedly met with Kim Jong Un according to the Washington Post. If true, the meeting confirms that high level Trump administration officials have been in contact with Un concerning plans for the summit, as Trump has indicated in recent days.