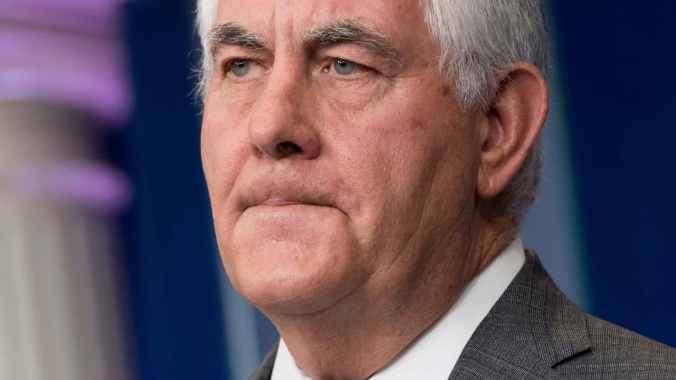 Rex Tillerson is out as secretary of state. President Trump announced the move this morning. CIA Director Mike Pompeo will move from Langley to State and succeed him. Tillerson’s departure hardly registers as much of a surprise. The former SecState’s relationship with President Trump was riddled with tension, and suspicion on both sides. Tillerson never embraced Trump’s America First doctrine, and his loyalty was never 100 percent there. The condition of the State Department might’ve also played a role in Trump’s decision. State, to put it bluntly, is a wreck. Under Tillerson’s command, US diplomacy was adrift and never fully in sync with the foreign policy positions of the White House.

The timing of the move makes perfect sense. Trump needs an effective SecState to help him craft a strategy for upcoming talks with North Korean leader Kim Jong Un. Those talks are expected to take place before May, leaving little time for the administration to complete preparations and construct a viable strategy. Tillerson was not a major contributor when it came to North Korea. He contradicted the position of the White House in public on more than one occasion. To add insult to injury, Tillerson apparently did not learn of his dismissal until he read President Trump’s tweet this morning.

Pompeo’s Senate confirmation hearing will be scheduled for sometime in April.

While in Argentina over the weekend, Secretary of State Rex Tillerson remarked to reporters that the imposing of oil sanctions and restrictions against Venezuela’s oil sector is now on the table. US oil sanctions are considered the nuclear option and would close off Venezuela’s economy to the single source of dependable income it has left. US and international sanctions already in place against Venezuela have not had the intended effect. If anything, the moves have emboldened Venezuelan strongman Nicolas Maduro to dig in his heels and go for broke. In January, 2018 Maduro announced he will be seeking a new term in office. The presidential election has been scheduled for 30 April of this year and with the majority of opposition candidates and leaders banned from running, Maduro is expected to skate to an easy victory.

If the presidential election proceeds, and the Trump administration imposes an oil embargo in response, the impact on markets, supply, and output will be significant. 2018 has seen an overall tightening in the oil market and a supply disruption now is sure to cause reverberations that weren’t felt when there was a crude superabundance. If Venezuela faces an oil embargo its economy will collapse entirely and that could cause an undesirable chain of destabilization among its neighbors, and other Latin American nations. The prospects of sanctions bringing a scenario like this to life are real. Caribbean nations rely heavily on cheap Venezuelan oil and have resisted Tillerson’s calls for a hemisphere-wide effort to challenge Maduro. US, Mexican, and Canadian oil officials, and diplomats are forming a working group to try and find an alternative to Venezuelan oil for nations in the Western Hemisphere that are reliant on it at the present time.

President Trump favors harsher sanctions against Venezuela, though its uncertain if he’s willing to turn to his nuclear option just yet. As mentioned above, the current sanctions in place have not motivated Nicolas Maduro to begin the reform process. If US efforts to create an anti-Maduro coalition show signs of success between now and the end of April, expect the Trump administration to begin thinking seriously about oil sanctions, or an outright embargo against Venezuela by 1 May.

Saudi Arabia expected a swift capitulation after it imposed sanctions, and a quasi-blockade on Qatar last month. The action came about in large part because of Qatar’s independent foreign policy, as well as its penchant for pursing endeavors that were in direct conflict with those of the other Gulf States. Crises among the nations of the Arabian Peninsula are nothing new. The majority have been short-lived, and generally wind up resolved to the satisfaction of all parties involved.

This crisis is different in many aspects. Saudi Arabia, and its anti-Qatar partners went straight for the jugular. Riyadh’s demands amounted to a virtual surrender Qatar’s sovereignty. There were no indications that this action was in the works or on the horizon. It came as a bolt out of the blue, likely just how Riyadh intended for it to be. The Qataris did not capitulate. They brushed off the shock of the blockade, made the necessary adjustments, and soldiered on with a business-as-usual attitude. Efforts were made to resolve the crisis diplomatically. However, Qatar was not prepared to accede to any of the demands of the Saudis and their partners. The subsequent list of demands, and accompanying ultimatum that the Saudis handed down is dead in the water. Doha didn’t bite.

Now, as we move into late July, the Saudis are realizing they’ve placed themselves in a box. One which they cannot extricate themselves from without suffering a severe loss of face. The US is not going to be able to rescue them. Washington is frustrated with the lack of flexibility shown by the Saudis. Secretary of State Rex Tillerson has been pushing hard for a diplomatic resolution, essentially forcing the Saudis to negotiate on items they had previously considered non-negotiable.

The longer the crisis drags on, the worse the consequences will become for Saudi Arabia. It is losing face as a regional leader. Their move against Qatar has served to destabilize the Gulf region instead of bringing it in line with Riyadh’s wishes. Iran is gaining an advantage as the crisis brings the already chummy Tehran-Doha relationship even closer. Through its efforts to assist Qatar, Iran has helped derail a major power move by Riyadh. Finally, the Saudis have learned the hard way that President Trump’s enthusiasm for them will not translate to Washington blindly supporting actions or policies that benefit Saudi Arabia but simultaneously damage other US allies, as well as interests in the region.

As the Qatar crisis moves into a new phase with the Saudi deadline being extended by 48 hours, and the Qataris delivering a response to the ultimatum shortly after, it is becoming clear that the United States holds the key to resolving the crisis. All of the involved parties are US allies, and following his visit to the region in May, President Trump wields tremendous influence with the Gulf states. Mediation sponsored by the US would likely be favorable to both Qatar, and the Saudi-led coalition. Unfortunately, the United States is not be ready to assume the role at any point in the near future.

The Trump administration is divided on the Qatar situation right now. At the start of the crisis, President Trump unexpectedly voiced strong support for Saudi Arabia’s actions, and he has remained steadfast in his support since then. For most of June, US Secretary of State Rex Tillerson and Secretary of Defense James Mattis worked tirelessly to defuse the crisis. Tillerson held meetings with senior officials from Qatar, Saudi Arabia, Egypt, and other nations involved, urging them to keep the door to negotiations open. However, his efforts have been undermined by Trump’s vocal backing of the Saudis.

If the administration can unify under a somewhat more neutral position, the US is perfectly positioned to play a meaningful role in the crisis. Without a doubt, US interests are best served by a rapid end to the crisis on terms more or less agreeable to all sides. The longer the crisis drags on, it becomes more probable that outside forces will begin to play more dangerous, self-serving roles. Specifically, Iran, and Turkey come to mind. Neither Washington, or Riyadh want this. The difference is that the Saudis firmly believe they can choke Qatar into submission before either Iran or Turkey manage to gain influential political, and economic beachheads in Qatar.

A US backed effort to defuse the crisis through negotiations would go a long way in minimizing Turkish and Iranian influence on the Qataris. Unfortunately, the clock is not a friend of Washington right now, and the Trump administration does not appear to be anywhere close to presenting a united front on the crisis, and taking decisive action to alleviate the situation. 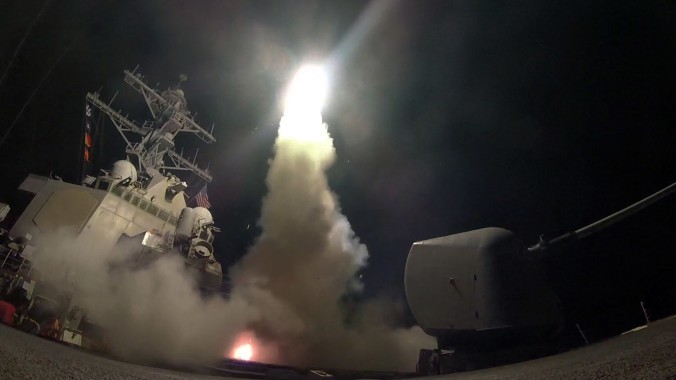 As a strong supporter of President Trump and his policy goals I was surprised by the talk of military action against Bashr al-Assad and his government that started to emanate from Washington DC beginning Wednesday night. Most Americans recognize the debacle that Syria has become and regard the mess as partly the result of the previous administration’s failed foreign policy. The last thing we want is to become embroiled fully in the tinderbox which Syria has become.

As a foreign policy advisor and geopolitical expert, on the other hand, I agreed with the tone and message on Syria that was coming from Secretary of State Tillerson and President Trump. Bashar al-Assad crossed a line by using chemical weapons against his own people. His actions demanded a firm, immediate response which would affirm that further use of chemical weapons by Syria will not be tolerated.

As an American I fully support the cruise missile strikes against targets in Syria. After eight years of the previous administration’s penchant for leading from behind, last night the United States of America reclaimed its place as leader of the Free World. The military action ordered by President Trump was measured, limited, and delivered the proper message to Assad, Russia, and our allies across the globe.  It was not a shot across the bow, or the implementation of a ‘red line,’ but a justified punishment and message to Assad and his Russian and Iranian allies.

What comes next is not as clear-cut as last night’s US action was. Tillerson spoke in broad terms yesterday about a coalition forming to stop Assad. He also said Russia has been either complicit or incompetent in reining in the Syrian government’s use of chemical weapons. The cruise missile strikes certainly raise the prospect of the proxy war in Syria heating up and will certainly raise tensions before Tillerson leaves next week for a visit to Moscow.

On the topic of Russia, today Russian President Vladimir Putin denounced the attack as “aggression against a sovereign state in violation of the norms of international law.” Russia’s Ministry of Defense also stated its intention to increase the capabilities of Syria’s air defense system following the attack. At current, Syria’s air defenses are centered around single-digit Soviet manufactured Surface to Air missiles from the Cold War era like the SA-5 and SA-4. These systems are very limited in their abilities to contend with cruise missiles such as the Tomahawk. In comparison, Russia’s newer double-digit SAM systems such as the SA-21 Growler, which is currently defending Russian forces in Syria, has the ability to detect and engage low flying cruise missiles.

Over the weekend we’ll take a look at some of the other topics emerging from the US strike, as well as try and chart in more specific detail what might come next in Syria, and for US-Russian relations.