2016 was a horrendous year for Turkey, one marked by terrorist attacks and political instability. Turks were fervently hoping that 2017 would bring peace and security to their rattled homeland. Unfortunately, it does not appear that will be the case. Little more than an hour past midnight on 1 January, a single gunman stormed into Reina, a crowded nightclub in Istanbul, and opened fire with an assault rifle type of weapon. 39 people were killed and 70 wounded in the attack. A manhunt is still underway for the gunman, though his identity is expected to be revealed very soon. ISIS claimed responsibility for the attack. In a released statement ISIS said the following:  “In continuation of the blessed operations that Islamic State is conducting against the protector of the cross, Turkey, a heroic soldier of the caliphate struck one of the most famous nightclubs where the Christians celebrate their apostate holiday.”

Turkey is in a state of emergency right now, facing security threats from multiple directions. This is the third major terrorist attack in the past month. ISIS has been responsible for many of the attacks, though Kurdish militant groups have been active on the terror front too. Turkey’s deepening involvement in the Syrian conflict has produced a third avenue of danger for the nation. In December, an off-duty police officer, apparently acting independently, assassinated the Russian ambassador at an art museum in Ankara. The motive of the attack was revenge for Russia’s part in the fall of Aleppo and an attempt to disrupt relations between Ankara and Moscow.

The attack did not change Turkey’s involvement in Syria or damage its relations with Russia. Shortly after the assassination, a ceasefire agreement was announced in Syria. One that Turkey and Russia will play a major role in.

The almost constant stream of terrorist attacks has degraded what little political stability remains in Turkey. The purges and crackdown initiated by President Erdogan have strengthened the hand of the government immensely while damaging the freedoms of many Turks. To counter significant backlash for this, Erdogan has promised increased security and a wider war against terrorism. The Turkish moves in Syria are a part of this effort and should there be a coordinated effort on the part of the United States and Russia against ISIS in the near future, Turkey will play a major role in it.

Sadly, none of this is keeping Turkish citizens at home very safe. Erdogan stated, accurately I believe, that these attacks are an effort to destroy morale and create chaos but they will only bring the country together. To reach that goal, Erdogan needs to formulate a more cohesive strategy for contending with terrorism on the domestic front. It is also quite essential for him to acknowledge the reality that his efforts since the coup attempt in July have made his nation less safe.

The factors which have fused together to lock the Middle East in destabilization are all active in Turkey at the moment: terrorism, the migrant crisis, and now the rise of authoritarianism. Erdogan should be scrutinizing the events in the region since the Arab Spring in order to ensure that he learns from the mistakes made by his counterparts in Cairo and elsewhere. Time will tell whether or not he does. 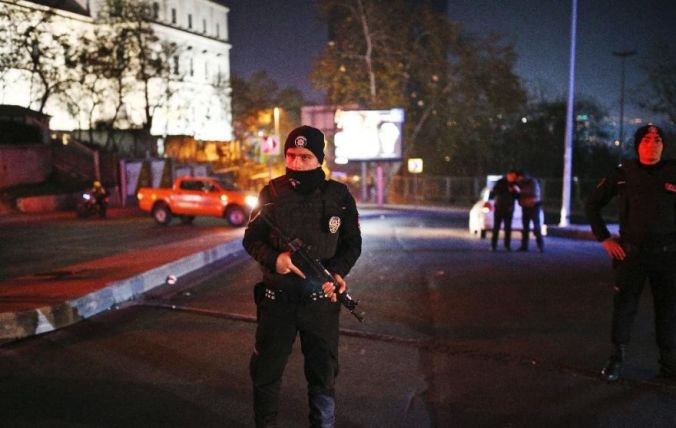 Following two bombings in Istanbul that killed dozens of people over the weekend, Turkey has struck back at the group which claimed responsibility for the attacks. The Kurdish Freedom Hawks, a breakaway faction of the PKK (Kurdistan Workers Party) released a statement claiming responsibility, yet also saying that the Turkish people were not the target of the bombs. Nevertheless, Turkey struck back hard yesterday with airstrikes against 12 PKK targets in northern Iraq and the arrest of over 200 members of Kurdish political parties on Sunday and Monday. The state-run Anadolu news service reported there were 235 arrests in 11 cities across Turkey.

Saturday’s bombings outside of a soccer stadium in Istanbul claimed the lives of 44 people and wounded over 150 others. 39 of the victims were police officers. The bombings have, predictably, raised anger and a nationalistic fervor in Turkey. Turkish President Recep Tayyip Erdogan will surely use the attack as a reason to push a bill expanding his powers through the parliament. If passed, the act will introduce an executive presidency similar to that of the United States to Turkey. Erdogan and his supporters claim it will help make the government more efficient, while his opponents are concerned it could potentially lead to Turkey becoming a one-party state.

Expressing concern about Erdogan’s strengthening power now might be a case of too little, too late. He already holds near-dictatorial powers and is shifting Turkey towards an authoritarian state since the attempted coup in July. The government and civil services have been purged of real and perceived anti-Erdogan sentiment. Free media is precariously close to extinction or, at the very least, intimidated into submission. When all is said and done, Erdogan will have reshaped Turkish politics and society into something few observers believed would ever be possible. With the new shape of Turkey will come the striking reality that there is no one left to stop Erdogan from doing whatever he wishes.