Yesterday in Washington the House of Representatives voted to end the thirty-two year old US arms embargo on Cyprus. The move came as part of the annual defense authorization bill, which has already made it through the Senate. Later in the afternoon the House passed a compromise foreign aid package that increases security aid for Cyprus, and censures Turkey for its oil, and natural gas exploration activities off the coast of Cyprus. The Turkish foreign ministry  responded with a statement warning that the US move “will have no outcome other than hampering efforts towards a settlement on the island and creating a dangerous escalation.” US-Turkish relations are at their lowest point in years and threaten to deteriorate further as a result of Turkey’s activities in Libya, Cyprus, and in the waters of the Eastern Mediterranean.

The settlement mentioned in the foreign ministry’s statement refers to the fact Cyprus has been a divided island since 1974 when Turkey invaded in response to a coup backed by the Greek government. Cyprus has been gaining international attention recently as oil, and gas exploration off its coast threatens to bring about a new crisis. Turkey has been at odds with Greece, Cyprus, and Israel since signing an agreement with Libya that claims extensive areas of sea between the two nations for Turkey. This deal violates international law, and undercuts claims made by Greece, and Cyprus. On Monday, a Turkish UAV landed in northern Cyprus, known as the Turkish Republic of Northern Cyprus. This comes after an Israeli research vessel was intercepted in Cypriot waters by Turkish warships and escorted out of the area.

The deal between Turkey and Libya has raised tensions in the region. If the Libyan government collapses it will be interesting to see how Ankara responds, and how it will affect the oil and natural gas scramble now going on in the Eastern Med.

Today the Pentagon, and US intelligence community continue to monitor the Middle East for indications that Iran is preparing to retaliate against Israel for its recent strikes against Iranian weapons facilities in Syria and Iraq. Israel also struck targets in Lebanon and Gaza in the last few days, escalating its campaign to deny Iran the ability to establish forward bases in close proximity to Israeli territory. With the attacks over, Israel, the United States, and the rest of the world have been waiting ever since for the Iranian response. It has yet to come though there is little doubt it will eventually.

The latest Israeli attacks differed from previous ones made against Iranian targets in Syria, and other areas. In the past, Israel has been covert regarding these efforts. This time, it was quite open about them. Some analysts believe the change has come at the behest of the United States, which has intensified pressure on Iran in recent months. Whether this is the case or not, it does not appear Iran is ready to confront Israel militarily. Tehran would be more likely to respond through its surrogates in Syria and Lebanon, most prominently Hezbollah.

Hezbollah has blamed Israel for a drone attack in a Beirut neighborhood early Sunday morning. One of the helicopter-type devices crashed and was recovered by Hezbollah members. The problem with the claim is that the physical characteristics of the recovered drone do not look like any type that Israel operates. This has led to much speculation about the origin of the drone. A number of military analysts around the world have suggested the drone is actually Iranian, leading to the assumption Sunday’s attack was a less-than-elaborate ruse on the part of Hezbollah and Iran.

If this is the case, it seems clear Iran and Hezbollah are either attempting to establish a faux justification for future hostilities against Israel, or simply building an equally as deceptive public relations campaign against their enemies in Tel Aviv and Jerusalem.

In either case, expect there to be more activity in the region over the coming weekend. 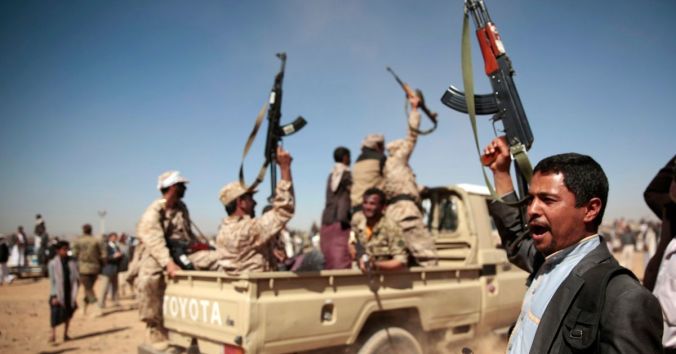 Iran-backed Houthi rebels attacked an airport in southwestern Saudi Arabia today. Saudi officials confirm a projectile struck an arrivals terminal at Abha International Airport near the city of Khamis Mushait. Houthi officials wasted no time in claiming responsibility for the attack with a spokesman for the rebel group saying a cruise missile was launched at the airport’s control tower. Saudi officials have said nothing about damage to the control tower, however, there were two dozen or so travelers wounded by the projectile that hit the terminal. The Houthis also claimed that this attack was a response to “Saudi Aggression” in Yemen, though no details were given beyond that.

Houthi attacks against targets in Saudi Arabia have ramped up in recent weeks. Last month, Houthi drones attacked a pair of pumping facilities along a Saudi pipeline, forcing Riyadh to close the pipeline for a short time. Also in May, Saudi forces shot down a Houthi drone that targeted Jizan airport near the Yemeni border. This month has not been any quieter. On Sunday, rebel drones struck a Saudi drone facility at another airport near the Saudi-Yemen border. On the following day, Saudi air defense forces intercepted two drones as they approached Khamis Mushait, where King Khalid Air Base, a major Royal Saudi Air Force installation is also located.

As tensions between the United States and Iran have drawn down recently, Houthi activity is on the rise in Yemen. Iran is likely pressuring the Houthis to continue their attacks on targets in Saudi territory in the hopes it will shift international attention away from the war of words now taking place between Iran and the United States. Despite its efforts, Iran has had little success persuading the Trump administration to roll back the sanctions now in place. Other attempts to enlist Europe’s help in the matter have so far brought no success. 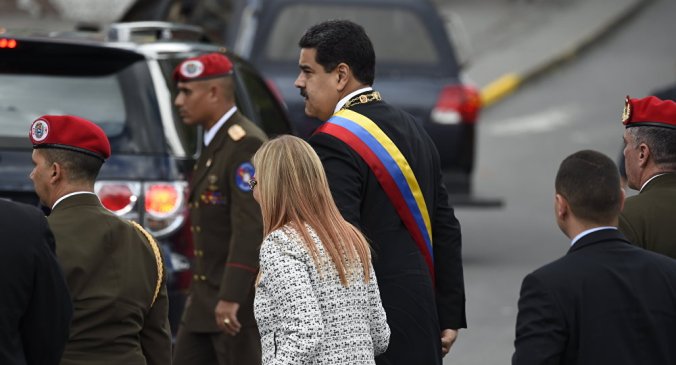 Venezuelan strongman Nicolas Maduro has laid the blame for yesterday’s alleged assassination attempt against him on an international ‘far right’ plot. According to him, the conspiracy was made up of Colombian President Juan Manuel Santos, Venezuelan exiles living in Colombia, and in the United States, as well as opposition groups in Venezuela,. Maduro then called on the Trump administration to “fight the terrorist groups that commit attacks in peaceful countries in our continent, in this case, Venezuela.”  Maduro offered no evidence to support his accusations.

Yesterday, at a military event in Caracas, Maduro was giving a speech when the alleged assassination attempt, by two explosive drones. Firefighters who were at the scene, however, dispute the drone claim, contending that a gas tank explosion in an apartment near the site of the speech. Television coverage of the event, which was carried live across Venezuela, showed no signs of drones in the air, or an explosion.

Maduro remains unpopular in Venezuela, a nation still suffering through a major economic crisis that is largely his doing. Opposition groups are often accused of plotting to assassinate government officials, or planning a coup. Maduro’s government uses these claims to justify crackdowns on the opposition groups, and the public in general. Adding Colombia, and Venezuelan exiles living abroad is a new twist. Placing responsibility for the supposed attack on external opposition groups, and the government of a neighboring nation could signal a change in tactics for Maduro’s foundering regime. As Venezuela continues to deteriorate, and support for his government evaporates completely, Maduro could be looking to rally the country against a perceived foreign threat. That way, Venezuelans might forget about the crippling poverty at home, and focus on defeating the threat to their beloved country. The strategy is no secret, and has been used countless times in Latin America by dictators faced with deteriorating domestic conditions at home.

Unfortunately for Maduro, it fails far more often than it works. 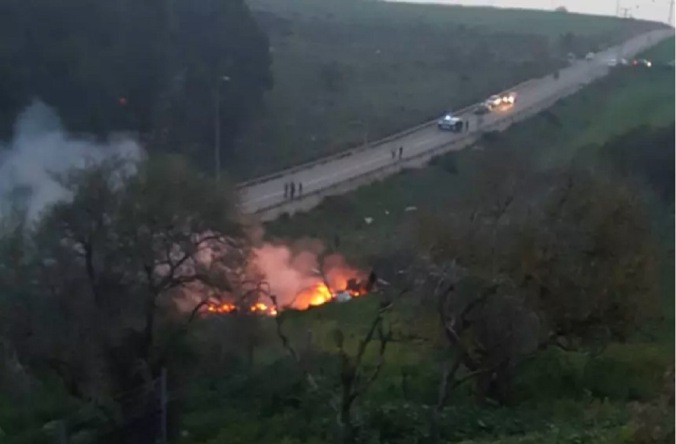 Tensions in the Middle East are heightened this Saturday after Israel launched air strikes against Syrian air defense sites, and Iranian targets inside of Syria following an earlier incident when an Iranian UAV entered Israeli air space and was shot down. During the Israeli raids one F-16 was hit by anti-aircraft fire and crashed in northern Israel. The pilots ejected safely, however, one sustained serious injuries according to reports. The incident marks the first time since the 1980s that an Israeli warplane has been shot down as a result of enemy action. Even more disconcerting is the fact that drone incident, and air strikes mark the first direct clash between Israeli and Iranian forces inside of Syria.

Israeli fighters struck the site where the drone was launched first. Subsequent strikes were made against other Iranian military targets in Syria, as well as Syrian air defense batteries. IDF reports do not indicate whether the F-16 was downed by AAA fire, or a SAM. The fighter carried a two man crew, indicating that was likely a type of F-16 that Israel uses in the SEAD (Suppression of Enemy Air Defenses) role, leading to the conclusion that the Israelis were probably targeting SAM batteries. (note: Right before posting I learned the aircraft was in fact struck by an SA-5 SAM)

Today’s shootdown is the third one to take place in the Syrian skies this week. A Russian Su-25 Frogfoot was downed by FSA forces last Saturday, and earlier today it was confirmed that a Turkish helicopter over northern Syria was attacked and destroyed by Kurdish forces sometime in the past 24 hours.

The consequences of the action in Syria and northern Israel remain to be seen. There is a strong possibility that Israel’s response could be heavier air strikes against targets in Syria, possibly as part of a bigger effort to put more pressure on Iran.

Although the Olympic games are supposed to bring peace and goodwill to mankind, it would appear somebody forgot to tell that to Iran and Syria.