There’s something to be said for the determination of former Catalan President Carles Puigdemont. Even after he was officially removed from office on Saturday he remained outspoken regarding his commitment to lead Catalonia to independence in the future. On Saturday afternoon after the Spanish government suspended Catalan autonomy, dissolved its government and assumed control of government functions in the region, Puigdemont released a prerecorded address to Catalans. In it he called Madrid’s actions ‘predetermined aggression’ and promised to continue the fight for independence through ‘democratic opposition.’  Regardless of his promises and desires Puigdemont is, for all intents and purposes, a man without a country.

Madrid is imposing direct rule on Catalonia, as Spanish Prime Minister Mariano Rajoy promised would happen if events continued along the independence path.  The declaration of independence passed by the Catalan parliament on Friday is now officially inconsequential. Whatever power base separatist politicians believe they had following the referendum appears to be dissolving, if it ever truly existed in reality at all. Polls published by the Spanish newspaper El Pais this weekend show more Catalans in favor of dissolving the regional parliament and holding new elections.  Fifty-five percent of Catalans who responded to the poll opposed the declaration of independence, with forty-one percent in favor. Those numbers are not encouraging signs for deposed Catalan MPs and other pro-independence and separatist politicians who want to continue the fight.

Whether the separatists refuse to acknowledge it or not, the writing is on the wall. The bid for independence was doomed from the beginning. Even if the pro-independence politicians had removed the blinders and recognized that the level of support they believed they had was in fact a mirage, there is no conceivable way the Spanish government would’ve ever allowed one of its most valuable regions to break away from the mother country. Had the shoe been on the other foot and Catalonia had somehow won independence from Spain, Puigdemont and his newly formed government would have found their new state to be a pariah on the international scene. Spain’s allies in Europe, along with the European Union, and the United States strongly opposed Catalan’s independence experiment. Although the EU, and a handful of European states offered their help in negotiations between Catalonia and Madrid should it come to that, all foreign states and bodies have recognized publicly that the Catalan Crisis is an internal matter.

The crisis has not passed just yet. There are still hurdles for Madrid to overcome, and it has to determine if and when full autonomy will be returned to Catalonia. The coming weeks and months will be a time to mend wounds and forge a stronger relationship between Madrid and the region. Failure to do so on the government’s part will only invite Catalan separatists to resume the fight for independence at some point down the line.

Whether they realize it or not, Catalonia’s separatist politicians have an image problem. Carles Puigdemont and company are emerging as the rapscallions of the Catalan crisis instead of the Spanish government. This is contrary to how  Puigdemont and his associates intended the situation to play out. By this point, Madrid was expected to have seen the light and sat down with Catalan’s government officials to negotiate a phased, eventual separation of Catalonia from Spain. To the surprise of Puigdemont, the Spanish government’s response was strikingly different from what was expected. Madrid has stood up to the challenge, and has every intention of fighting tooth and nail to keep Catalonia from breaking off and becoming an independent state. Since the Catalan independence referendum on 1 October, nationalism has taken root across the country. Even in Catalonia, support for independence is not overwhelmingly high, contrary to what the separatists in the Catalan government want people, and the media to believe. In Barcelona, the heart of Catalonia, many residents are critical of their region’s government, accusing the separatist politicians of touching off this crisis purely to achieve their own ends.

Remarks made today by Catalan Vice President Orio Junqueras seem to support the suspicions about separatist politicians. In light of Madrid’s intent to impose direct rule, Junqueras sees a quick declaration of Catalonia’s independence as the region’s next logical step. Speaking on behalf of his Republican Left party’s members, he said the party is committed to “work toward building a republic, because we understand that there is a democratic mandate to establish such a republic.” Whether or not such a mandate exists depends on whom you speak to. Spain’s Constitutional Court ruled against the 1 October referendum making the results invalid.  Junqueras, Puigdemont, and Catalan separatists point to those same results as proof that a mandate exists regardless of the Constiutional Court’s ruling.

Catalonia’s political elite has still not come to terms with the severity of the situation before them. Madrid plans to fire all of them and assume control of the region until new elections can be held. Catalan leadership has yet to put together an effective plan to delay, or block Article 155’s from being implemented. Time is running out and a declaration of independence at this point will do nothing but speed up the Spanish government’s plans to impose direct rule in Catalonia and put an end to the subversion once and for all. 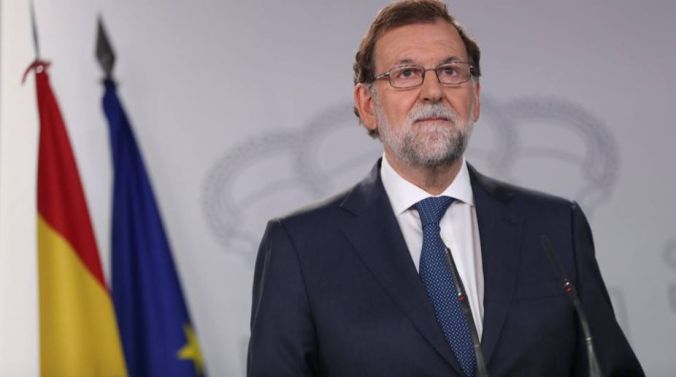 The next twelve hours might prove to be the most critical period of time in Spain’s history since the nation returned to democratic rule in the late 70s. Catalan regional leader Carles Puigdemont has until 1000 hours tomorrow morning CEST (0400 here in the eastern US) to retract the equivocal declaration of independence he made last week. Otherwise Prime Minister Mariano Rajoy will suspend the region’s autonomy and impose direct rule in Catalonia. Earlier today (bear in mind it is still Wednesday on this side of the Atlantic) Puigdemont informed members of his Catalan Democratic Party that he will issue a formal declaration of independence if Rajoy moves ahead with his threat to suspend Catalonia’s political autonomy.

Rajoy has the power of the 1978 constitution behind him. Article 155 gives him the power to take control of a region if it violates Spanish law. The current situation in Catalonia certainly fits the bill perfectly. Taking control  of a region, however, requires the approval of parliament and it would be at least a few days before the Spanish government could move decisively to impose direct rule. This potentially gives Puigdemont a brief period of time to unilaterally secede Catalonia from Spain and set the stage for what could potentially be long term civil unrest.

The possibility of a Catalan secession has raised fears of social unrest and unforeseen circumstances down the line. Spain’s political uncertainty has caused Spanish stocks to fall in trading this week, and sharply undermined the recent gains by the Euro. The European Union is watching the situation closely and its offers to mediate negotiations are growing stale.

Madrid appears to be in no mood to negotiate and Puigdemont’s words today indicate  Catalonia’s government will not meet the Rajoy’s demands. As the deadline approaches, resolve seems to be stiffening immeasurably on both sides. For the moment, an eleventh hour compromise seems unlikely. All eyes are on Barcelona and Puigdemont right now. The next move is his to make.

When he stepped up to the podium to address Catalonia’s parliament today, Catalan leader Carles Puigdemont had three choices to select from. He could declare independence and single handedly plunge his region, and its parent nation of Spain into a veritable civil war. Or he could do the complete opposite and back down entirely, taking the prospect of Catalan independence off the table for good. The third choice was to walk a fine line between the aforementioned options, do neither, and craft a compromise that does not extinguish the flame of regional independence. Politically speaking, this was the most palatable choice available. Not surprisingly, Puigdemont took the compromise approach and laid it out in his address today, but it remains to be seen if he grasps that there was no other choice for him and that his actions since the referendum have dramatically undercut his position.

Puigdemont, in his address, said the people of Catalonia have chosen independence but it should come through a negotiated settlement with Madrid. Catalan officials claim the results of the 1 October independence referendum indicated over 90% of Catalan voters supported independence from Spain. The vote results are not official since the referendum was declared illegal by the Spanish government and Spain’s Constitutional Court suspended it. Spanish police prevented voters from entering many polling sites, causing a series of sharp clashes between Catalan voters and police in the streets of Barcelona and surrounding towns.

Puigdemont points to a desire to de-escalate the tension around the issue as his motivation for wanting to negotiate now. This represents a 180 degree turn for a man who was poised to issue a declaration of Catalan independence the moment the referendum ended. There was no talk of negotiating with Madrid in the lead up to 1 October. If the referendum went in favor of independence, Puigdemont gave every indication that Catalonia would secede quickly. When that moment came, though, he found that he had miscalculated the Spanish government and the Spanish people. Catalonia’s separatist designs served to rapidly revive Spanish nationalism. Video and images of Catalan citizens assaulting Spanish police during the referendum has had a dramatic effect on the Spanish populace. The spectacle of Catalonia simply walking away from Spain has touched off a furious wave of nationalism across the country.

Puigdemont did not for one moment believe this was how Spain and its citizens would react. He overplayed his hand and has chosen to pull back and regroup,  believing that Madrid will negotiate a Catalan exit in good faith. The current mood in Spain, however, appears to say otherwise.

Catalonia’s ill-advised, and illegal independence referendum has placed Spain on the verge of a constitutional crisis. If  Catalan leader Carles Puigdemont follows through on his promise to declare independence in a matter of days the stage will be set for a major confrontation between the government and Catalonia. The Spanish government would almost certainly block the move by any and all means including the use of force. Spain is well within its rights should it feel compelled to use military force. Catalonia’s government leaders, police officials, and referendum organizers incited rebellion against the state with their actions thus far.

Madrid cannot and will not allow an independence declaration to stand. If Catalonia is permitted to detach itself from the rest of the country and form a new nation-state, the Kingdom of Spain would dissolve within a year, carved up and Balkanized. The Basque region will follow Catalonia’s lead and declare independence next. Although a permanent ceasefire exists between the Spanish government and Basque Separatists, Catalan moves are being watched closely in the western  Pyrénées. A whiff of independence is already in the air and if Madrid wavers even slightly in its standoff with Catalonia, Basque Country’s declaration will come quickly.

The rest of Europe is watching this crisis carefully, cognizant that the wrong move by either the Spanish government, or the Catalans may trigger a chain reaction of similar events across the continent. Spain is not the only EU nation with a separatist movement within its borders, and a few European nations have experience in fending off separation such as Belgium.  Some European leaders are calling for a dialogue between Madrid and the Catalans, however, the statements generally end there. At this point no one wants to appear to be interfering in another nation’s domestic affairs. And for the moment the Catalan situation falls squarely into that category.