In an effort to help Ukrainian forces even the odds on the battlefield, the Trump administration has approved a plan to send Javelin anti-tank missiles to Ukraine. The move follows months of debate within the Defense Department and White House on whether or not to sell lethal arms to Kiev. The Javelin ATGMs will be included in a package of arms that will be provided to Ukraine for the first time. Up until now US assistance has been confined to training and support equipment.

The Javelin is a highly effective missile that has been proven in combat. It is known to be effective against most tanks and armored vehicles in the Russian arsenal. For the duration of the conflict in eastern Ukraine, Russian-provided –and in many cases crewed– armor has often tipped the scales in the direction of the separatists. Kiev had requested Javelin shipments from the Obama administration since the beginning of the conflict, though the previous administration refused for fear of escalating the conflict. The current administration’s decision to provide the Javelins now is going to give Ukraine a weapon that will help even the odds against Russian armor on the battlefield.

Predictably, Russia has not reacted positively to the US move. Not long after the US State Department announced the intentions to provide lethal arms to Ukraine, Moscow warned the move will cause new bloodshed in the fighting, and possible escalation. “The United States has crossed a line by announcing its intention to supply lethal weapons to Ukraine,” Russian Deputy Foreign Minister Sergei Ryabkov said Saturday. “U.S. weapons are capable of leading to new casualties in our neighboring country, and we cannot remain indifferent to that.”

US-Russian relations have grown chillier in recent months. The Trump administration is obviously adopting a tougher stance towards Russia and the Javelins are a clear sign of this. As 2017 is coming to an end, events in Ukraine, and US-Russia relations are again taking priority in the minds of policymakers and analysts in Moscow, Washington DC, and Europe.

While the Obama administration has struggled to construct a cohesive policy to deal with an aggressive Russia, the Pentagon not having any trouble. Plans to increase US military capabilities in Eastern Europe continue to evolve and move forward at a respectable pace. Recognizing the need for a credible combat presence on the ground in Eastern Europe, the Pentagon unveiled its plan to base an armored brigade there in 2017. The equipment will remain in place while the troops rotate in and out at six or twelve month increments. The equipment going to Eastern Europe in the future will be best available to the US Army. M-1A2 Abrams battle tanks, the latest version of the M-2 Bradley IFV, M-109A6 Paladin and MLRS artillery systems, to name some. The move is hoped to reassure allies in the region of how committed the US is when it comes to European security.

The basing and rotation concept is not new and bears a striking resemblance to the REFORGER system used by the US during the Cold War. REFORGER was a simple but effective system where troops from the United States would fly to Europe in the event of increased tensions, marry up to prepositioned equipment in Europe and deploy forward.

Rotations of the brigade will increase US Army combat strength in Europe to three brigades. The 173rd Airborne Brigade Combat Team in Italy and the 2nd Cavalry Brigade in Germany are the main US Army combat units currently in Europe. Neither brigade is a heavy maneuver force. The 173rd is made up of airborne infantry and the 2nd Cav is a Stryker unit. They do not have the combat power to go head to head against Russian armor or motorized infantry units. A US armored brigade, on the other hand, does. Should a crisis between NATO and Russia ever break out in Europe, US tanks will be in high demand. Basing a heavy brigade near a potential Eastern European flashpoint only makes good strategic sense. 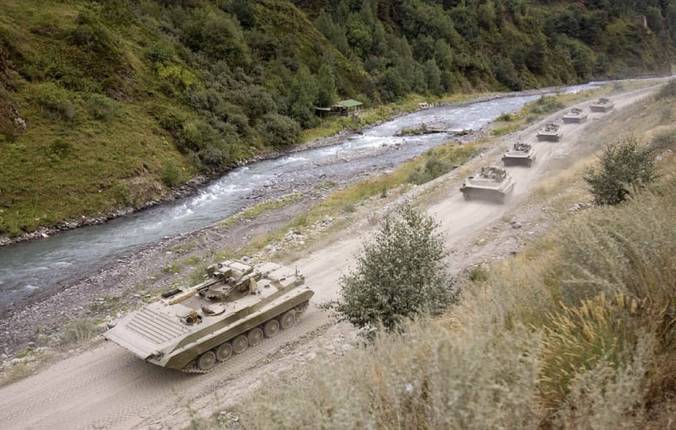 Through the Cold War years it was generally expected that if war were to erupt in Europe between NATO and the Warsaw Pact it would begin with a full scale Soviet invasion of West Germany. Endless waves of Soviet armor pouring across the North German Plain was a constant nightmare for western military planners. Should the day have come, both sides were prepared to fight and decisively win the battle. For over forty years Europe was a veritable armed camp on both sides of the Iron Curtain. Fortunately, the war that so many expected and prepare for never came.  In 1989 peace broke out instead. The Cold War ended and the massive armies staked out on both sides of the border either fell victim to the Peace Dividend or simply melted away.

Fast forward to the current day. The ghosts of that hypothetical battle appear to have found a new home in Eastern Europe. NATO is once again facing the prospect of having to fight a potential conventional war in Europe against Russia. The current parameters and balance of forces are somewhat different when compared to 1989, though. And for that matter, so is the real estate where the fighting would take place. Yet, for as many differences as there are, a number of similarities between then and now also exist.

For the purpose of this article, let’s assume the NATO-Russia war centers on a Russian invasion of Poland. Let us also assume that by the time Russia launches its attack on Poland (H Day), at least two of the three Baltic states have been neutralized either through political or military means: Hybrid War and/or political coups negate Estonia and Latvia. The NATO forces stationed there have been redeployed to Poland. Only Lithuania is holding out, but it will not last for very long once offensive operations commence.

At first glimpse, an invasion of Poland appears to be a condensed version of a Soviet invasion of West Germany. On the Russian side, the main offensive weapons will be heavy maneuver (tank and motor rifle) forces, supported by a respectable amount of artillery and airpower. Airmobile and special operations forces will be employed to seize key objectives and cause disruptions in NATO rear areas. Speed and shock are essential for a Russian thrust. The armored spearheads on the ground must overwhelm NATO defenses and achieve a breakthrough before additional NATO reinforcements arrive to plug the gap. When a breakthrough is made, Russian forces need to exploit it quickly and take advantage of the terrain. As mentioned in previous articles, the eastern half of Poland is very favorable for tanks and mechanized infantry.

Expect the main Russian effort to come from Belarus in the form of two pronged assault. One, spearheaded by the 20th Army and attached reinforcements, advancing from the Grodno area and crossing the frontier east of Bialystok, Poland. The second, made up of the 6th Army and attachments, will cross the border from around Brest in Belarus and driving west towards Biala Podlaska and beyond. The 1st Guards Tank Army will serve as an Operational Maneuver Group of sorts, prepared to exploit a breakthrough. The primary objective of an invasion would be Warsaw. In all likelihood, it is not viable for the Russians to want to advance beyond the Polish capital. West of the city the terrain becomes more favorable to the defender and the closer the Russian army gets to Germany, the higher the possibility of escalation.

An advance from Kaliningrad is feasible as well. However, the objectives of it will likely be limited. The terrain in that area of Poland is somewhat more rugged and defendable and the Russian forces in Kaliningrad do not possess the combat power and logistics for a deep advance into Polish territory. But they can at least hold down NATO forces for a period of time.

Eastern Poland is dominated by farmlands and thick swaths of forest. Cities and towns dominate the landscape, yet none of them are so valuable that either side would feel compelled to spend valuable time and efforts in defending or seizing them. The terrain is generally flat with low rising hills being common. There are no mountains or ridges in the potential areas of advance and fighting. The Bug River is an obstacle that will need to be handled by the Russians should NATO use it as a defensive line. Its value was mentioned in previous articles. To summarize, if Russian forces move fast enough and can achieve a breakthrough, the possibility of pocketing NATO forces east of the Bug does exist. Such a scenario would be disastrous for NATO and Poland especially. It would lead to a cease fire agreement with terms very favorable to Russia.

For NATO, defending Polish territory would be an exercise similar to what would have been seen in West Germany had the balloon gone up there during the Cold War. The Poles have to avoid defending too far forward and standing its ground too stubbornly. Both instances will result in heavy casualties for little in return. Poland can trade space for time until reinforcements arrive from other NATO allies and from across the Atlantic. But it has to be willing to accept having a portion of its territory and citizens in Russian hands for a period of time.

*Much of my posting lately has been devoted to Greece. I anticipated finishing the Defending Poland articles by last Thursday. This has not happened, so I am extending the timeline slightly. I will publish Part Two of this article later in the week and wrap up with a concluding article over the weekend. In between, expect more updates and some analysis on what is happening in Greece right now.*

The notion of positioning of US heavy equipment in Poland appears to be moving forward and gaining momentum. On Sunday,  Poland affirmed that it is in talks with the United States regarding the possible storage of US heavy weapons in Poland. The discussions are part of wider negotiations between Washington with its Eastern European allies concerning an increase in the US military presence in their countries.  The New York Times broke the story earlier in the weekend and since then, a number of news agencies around the world have been reporting the news.

The concept of creating prepositioned storage sites for a US armored brigade in Poland has been discussed and explored in recent months by defense analysts. It has even been mentioned a number of times on this blog. For what it is worth, I am a firm supporter of the idea. It is practical, cost effective and gives NATO ground forces a significant advantage in a potential conflict in Eastern Europe.

The timing of this development dovetails perfectly with the Defending Poland series. I will elaborate more on pre-positioned material and possible POMCUS sites in Poland this week.