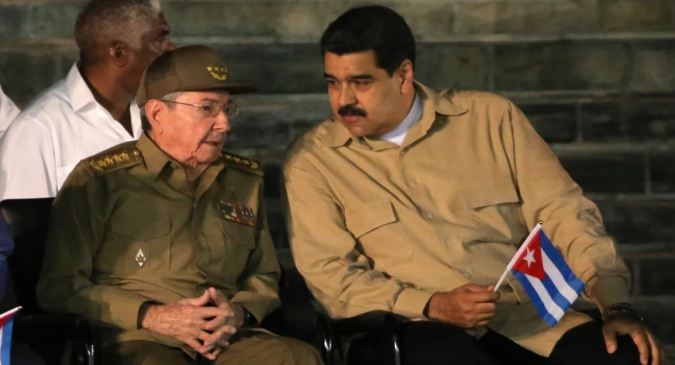 As Venezuelans endure their nation’s second major power outage in a month, and recently arrived Russian troops go to work on the ground, the United States is beginning to scrutinize Cuba’s role in the Venezuelan crisis. The Trump administration has said publicly that Cuba is the prime reason Nicolas Maduro remains in power. Havana’s support for Maduro and his government has been essential. The close ties between Venezuela and Cuba reach back to the heady days when Hugo Chavez and Fidel Castro ruled. These men, and the nations they led, were socialist brothers fighting the influence of the United States across the Caribbean, and South America.

Their successors are trying desperately to keep the tight relationship from unraveling. As Venezuela’s political and financial situations have spiraled out of control, it’s more dependent on Cuba’s aid than ever before. Unfortunately for Cuba, its moves in Venezuela are starting to attract US attention at a point where the stakes are growing high. The US has gathered and unleashed a heavy salvo of diplomatic and economic pressure on Nicolas Maduro’s government to punish, and eventually dismantle it once and for all. The efforts of Cuba, and a handful of nation-states outside of the Western Hemisphere, are working on the opposite hand to keep Venezuela afloat, and diminish the effect US sanctions, and diplomatic pressure are having.

Cuba has been present and active the longest. Its influence is felt on many levels of Venezuelan life. Cuban doctors have been working to prop up Venezuela’s failing medical system. Cuban military advisers have been training the Venezuelan military, and in some instances Cuban officers have assumed command responsibilities in some of Venezuela’s most capable combat units. There are reports that Venezuela’s military strategy is shifting towards fighting a ‘prolonged asymmetrical war’ against a US invasion, and this doctrinal change was made by Cuban military advisers.

How the US chooses to combat Cuba’s influence remains to be seen. Despite a brief warming of relations between Havana, and Washington during the later Obama years, relations are icy once again. The Trump administration does not regard Cuba as a potential ally like the Obama administration had. President Trump, and his national security team regard Cuba as an unrepentant agitator, and supporter of left-wing regimes across the hemisphere. If US policies and actions aimed at Maduro end up having a negative effect on Cuba, the Trump administration will not lose any sleep over it. If bringing down Maduro can help destabilize the Cuban government, the United States is all for it.

The difficult part for Washington will be identifying the right opportunity when it comes along.