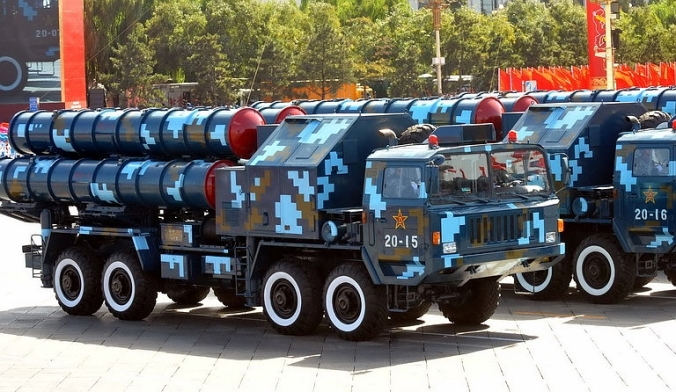 The People’s Republic of China is continuing its buildup of military power on contested islands in the South China Sea. Today, Fox News reported that two batteries of the HQ-9 Surface-to-Air missile system, and accompanying radar sets have been placed on Woody Island, which is in the Parcel Island chain. The source Fox News used was imagery from a civilian satellite. The Parcels have been in the news of late. In January, 2015, a US destroyer sailed close to another contested island, prompting China to vow there would be “consequences” for the action. Taiwan and Vietnam also have a claim on the island.

The report comes as the US-ASEAN summit in Palm Springs comes to a close. The South China Sea was the priority issue at the summit. The Obama administration ideally wants ASEAN to call for the territorial disputes to be resolved through peaceful means. China continues to claim a historic right to virtually all of the South China Sea area and has ramped up its militarization of some islands in recent months. While the US strives to find ways to ease the tension, it has not taken a firm enough stance itself in the dispute.

The HQ-9 is a Chinese copy of the Russian Sa-10 (S-300) missile system. It is an effective missile with a range of 125 miles. Placing two batteries on Woody Island is probably intended to deter the US from flying patrol or combat aircraft in close proximity to the island. A US Defense official confirmed the authenticity of the photos that Fox News aired and posted on its website.

Although Syria, Oil Prices, Russia and Chinese economic difficulties have received the lion’s share of media attention this year, things are happening in the South China Sea. By all indications, the tempo of Chinese operations there is not going to slow down soon.