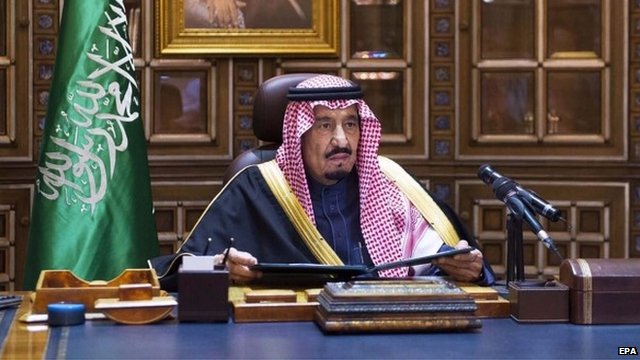 Close relations with Saudi Arabia are almost as essential for the United States and its Middle East policies as is the special relationship with Israel. This was evident following the death of King Abdullah last month. President Obama led a group of thirty current and former members of the US government to Riyadh to pay respects to Abdullah and meet with King Salman. The caravan of Washington DC policymakers underscores the importance that is placed on the US-Saudi relationship.

Saudi Arabia matters to the United States and it has for decades. On the surface, much of this importance appears economic in nature, owing to the vast reserves of oil embedded beneath the Saudi desert. The Saudis hold 16% of the world’s oil reserves and is the largest exporter of petroleum in the world. Europe, Japan, and increasingly China and India, rely a great deal on Saudi oil to fuel their economies. The Kingdom is also the second largest petroleum exporter to the United States. Disruption of the Saudi oil flow would cause a ripple effect across the economies of the world. Therefore, Saudi Arabia will remain relevant for the foreseeable future.

Saudi Arabia’s importance is not limited to economic interests. The nation is a bastion of stability in a neighborhood that thrives on instability. Think of the Kingdom as an anchor that is tied to US interests. Iran’s growing influence is not in either nation’s best interests. Neither is Al Qaeda, ISIS, the current situation in Syria or other elements of instability that can be exploited by Iran. As Saudi Arabia goes, so does US influence in the Middle East.

King Salman has taken the throne at a precarious time for Saudi Arabia. A number of challenges await him, both at home and in the region. Each one is important to the security of his nation. The domestic issues, while important in their own right, can be discussed at another time. For the purposes of the moment, this article will focus on the external challenges facing the Kingdom.

The situation in Yemen continues to deteriorate. The ascension of the Houthis and their announced takeover of the government have not been well received by a large portion of Yemenis, who view the Houthi announcement as the end of a coup. Government decisions will now be made by an appointed revolutionary council that is made up primarily of Houthis. Protests and demonstrations have been going on since the arrival of the Houthis in Sanaa, the capital city of Yemen. With the Houthi consolidation of power nearly complete, the protests show every sign of increasing in frequency and determination. How the drama plays out remains to be seen, but one of two outcomes seems most likely. Political and tribal divisions could lead to open conflict between factions, resulting in a breakup of the nation. Or, on the other side of the spectrum, the Houthis retain total control of the country and Yemen becomes an ally of Iran.

In either case, Saudi Arabia would come out as the loser. Since 2011, Riyadh financially supported the transitional government out of fear that a collapsed Yemen would intensify the threats of Al Qaeda-Arabian Peninsula and the Iranian allied Houthi militants. Saudi Arabia is fortifying its border with Yemen to insulate itself from its wobbly southern neighbor. Funding to Yemen has also been halted in the hope that it will make the new leaders in Sanaa more open to compromise. So far, there has been no response. The vast amount of influence that Riyadh once held is quickly diminishing. The Saudis are finding themselves with no favorable options to contend with an unbalanced, potentially hostile southern neighbor.

Saudi Arabia is set squarely in the crosshairs of ISIS. The group’s leadership has referred to the nation as the “head of the snake and stronghold of disease.”  The most desirable target of the Islamic State, the Kingdom will also prove the toughest nut to crack. ISIS fighters are present in Saudi Arabia and have been responsible for a handful of attacks, including the killing of a Danish National. The Saudis are responding effectively to ISIS. Security forces have been deployed to the border with Iraq in an effort to curtail militant activity. Over 130 suspected ISIS members have been arrested in the past year.

ISIS has been able to gain footholds in Iraq and Syria largely due to its appeal to disaffected populations in areas where government control is weak or has collapsed. There is no shortage of estranged residents in Saudi Arabia, but the government has a reputation of launching brutal crackdowns at the first signs of ill intent towards the government. The Saudis have been successful in combating Al Qaeda over the past thirteen years and will not be as open to the ISIS threat as other nations in the region.

This does not mean that Saudi Arabia does not have, or will not have a problem with ISIS in the future. As of May, 2014, the number of fighters from Saudi Arabia who went to Syria to fight with the Jihadists stood at 2,500. Roughly 500 went to Iraq from the Kingdom. In the last two years many men have returned to Saudi Arabia and undergone a government mandated “counseling and care” program. Some have ‘relapsed’ according to the Ministry of the Interior. These relapsed fighters become a risk for Saudi security and could carry out lone wolf attacks inside the Kingdom.

There is probably not going to be an ISIS uprising in Saudi Arabia similar to what took place in Syria or Iraq. However, we are going to see more Islamic State support for elements in Saudi society that are sympathetic to the ISIS cause. King Salman is well aware of the threat posed and Saudi security forces will be busy guarding against ISIS sponsored attacks for the foreseeable future.

Saudi Arabia and Iran are the two biggest kids on the block in their area of the world. Each nation has its own blueprints for leadership of the Persian Gulf region and those ideas are markedly different. Oil exports, interpretations of Islam and relations with the West are some of the geo-political issues that Iran and Saudi Arabia clash on. Historically, relations between the two nations have endured more periods of strain and near hostility than times of improvement and warm ups in relations.

The current set of circumstances is nothing short of a cold war. Saudi Arabia believes that Iran’s main ambition is to export its revolutionary ideas across the Arab world and expand influence in the Persian Gulf region. It is wary of Iran’s goal of achieving regional hegemony and is the only regional power able to stand in direct opposition to Iran’s hegemonic moves. Relations have been on a downward spiral especially since the 2011 Iranian attempt to assassinate the Saudi ambassador to the United States. Earlier in 2011, in the midst of the Arab Spring, Iran’s fingerprints were evident in the Bahraini Uprising. Saudi Arabia dispatched 1,000 troops to Manama to help stabilize the situation, largely out of fear that if Bahrain’s government fell, it would be replaced by a revolutionary government aided by and allied to Iran.

3 thoughts on “Why Saudi Arabia Matters”